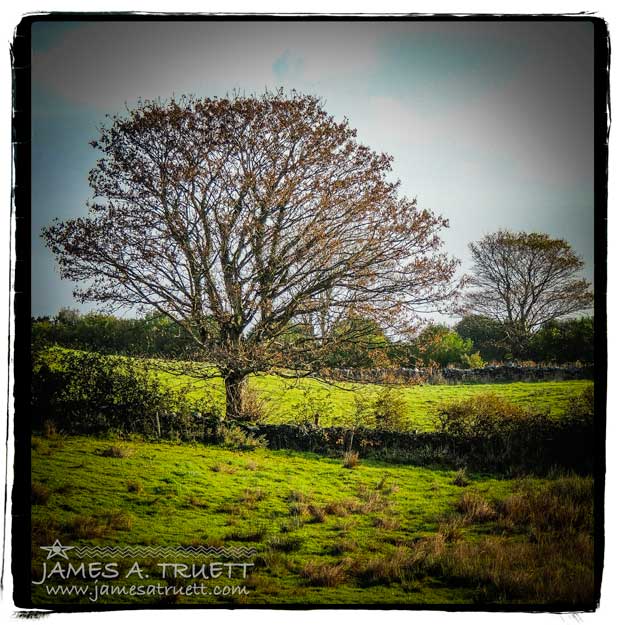 Autumn tree sheds its leaves in a rock-walled Irish meadow.

An autumn tree sheds its leaves in a Irish meadow divided by dry-stacked stone walls in the hills above Lissycasey, County Clare, Ireland.

Are the larger trees in this photo “fairy trees”? It’s a good bet they were allowed to grow out of concern they might be home to the legendary nature spirits, known to wreak havoc on anyone who disturbs their dwellings.

With more than 7,500 varieties of trees in Ireland, Celtic myths and legends are woven around most of them. While the Thorn tree is generally considered the “official” fairy tree, the trio of Oak, Ash and Thorn trees were all believed to have special powers in Celtic lore.

In local tradition, to cut down a fairy tree risks attracting bad luck to your doorstep. These beliefs were so powerful that many would endure a cold winter without firewood rather than risk harvesting a suspected fairy tree.

In contemporary times, the belief in fairy trees has prompted highways to be re-routed and influenced local planning. Even the demise of the once-prosperous DeLorean Motor Car Co. has been attributed to the destruction of a suspected fairy tree during the building of its plant in Northern Ireland.

Have you had a personal experience with a fairy tree?